As the price of energy continues to rise and we continue to experience changes in our climate, the problem has never been so obvious: The world is in dire need of a cheap, clean way to acquire energy. Day after day we’ve all heard that we need to be more responsible with the world which is our home, and day after day our shrinking wallets push us more quickly to action.

But we don’t need to waste your time telling you what you already know, so let’s skip to the important issue: What is the best way to solve this problem? To cut straight to the point, solar energy is the answer IF a truly affordable method of harnessing the sun’s energy can be produced, here’s why. 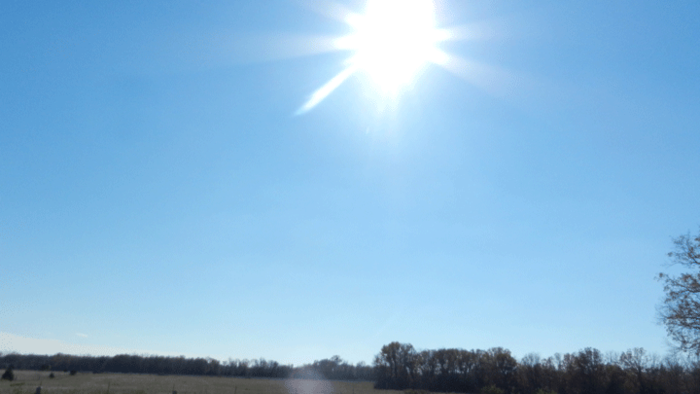 The most consistent, reliable source of energy that our planet has is the sun. And lucky for us, it doesn’t turn off if we’re late paying the bills. It’s always there and it’s always free. But that doesn’t mean anything if you can’t make those warm rays turn the lights on at night, keep your food fresh, or warm your home when it’s cold outside.

The world has taken steps in the right direction; the photovoltaic panels that are on the market are nice, but the extreme cost has kept them from becoming widely implemented.  Even with the recent government incentives the cost has still been out of reach for the average private consumer or business. Large-scale thermal solar plants do a fine job but they are generally built far away from where we live, making maintenance of these plants a challenge.

There’s just something wrong with the fact that it’s so difficult to utilize what is otherwise free and abundant. To be frank, we hate that. We wanted to change the way solar energy is approached. And change it we have!

HOW WE SOLVED THAT PROBLEM

Our project started out small with just 2 “slightly eccentric” inventors: Matt Bellue, an Aerospace CNC Machinist/Programmer with a passion for exploring new inventions and making them real, and Ben Cooper, an engineer and dedicated inventor with extensive background in the sciences. With our experience, passion for inventing, dedication to an affordable clean energy solution, and a healthy dose of outside the box thinking, we knew we could solve this problem. And so we founded our company, Missouri Sustainable Energy. 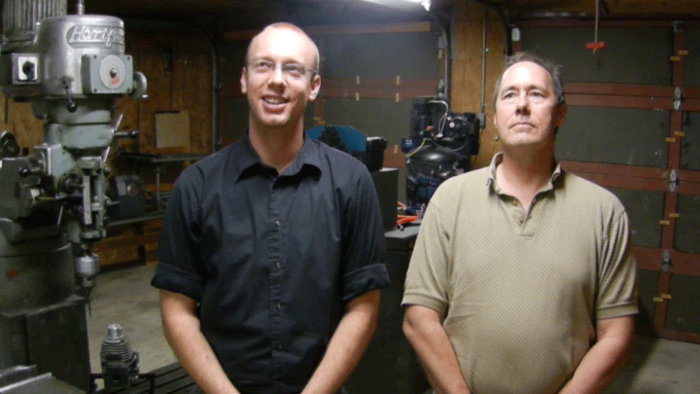 Matt and Ben, dreaming up great things in the shop

We spent months just researching what other people had already done. What worked and what hadn’t. What showed promise and what flopped. We hemmed and we hawed, we even played “Pin-The-Solution-On-The-Solar-Donkey” (hmmm, hopefully we get a a few courtesy laughs for that one)  And after all that, we finally came up with something that nobody had ever thought of or tried.  Are you ready to hear about how we’re going to change the world?

It all starts with a standard gasoline engine.  Yes, that’s right; we’re going to make a gasoline engine generate electricity by running it on solar power. Sound outrageous? Well, it might, but keep reading!

The principle in a gas/diesel engine is fairly simple:  Inject fuel into the engine, a spark is fired, an explosion occurs and as a result the piston moves, turning a generator, pushing a car, or driving whatever the engine is connected to.

Now here’s where we turn the world upside down. Take that same engine and modify the variables slightly; instead of injecting gas/diesel, inject hot oil (using mirrored parabolic solar collectors, temperatures of 800 degrees farenheit can be reached!) into the cylinder. Instead of a spark, add a few microdroplets of water. When the water contacts the hot oil, the oil’s thermal energy is transferred to the water and it instantly flashes to steam.

When water changes from a liquid to a gas, it has the potential to increase it’s original volume by 3,000 times. It’s this powerful expansion that drives the engine.  Just connect a generator to the system and there you have it: An engine that only requires the warmth of the sun to produce electricity.

For just a quick second, let’s consider something that is often overlooked: Safety.

Safety is A MAJOR problem associated with steam turbines and engines. Each of these devices require high-pressure steam that must be created outside of the system in a boiler before being injected into the device. Steam can be extremely deadly at these pressures and the slightest problem or leak could result in fatalities. This is an acceptable hazard when utilized at the utility level by trained professionals, but NOT among homes, business, and communities.

Using the HydroICE method, the required steam is generated inside the engine where the work is being done. This eliminates the extreme hazard and makes it safe for use anywhere.

We’ve had a few people ask to see an example of the oil/water reaction in action.  Check out the video gallery at the top of this page for an eye-popping example of what we’re talking about.

In all of our countless hours of research, we haven’t found anybody who has mentioned, let alone come close to trying this idea.  Why?  Who knows, but we finally did and that’s what matters most.

USING THIS METHOD, IT’S FEASIBLE THAT WE COULD SEE THE COST OF SOLAR ENERGY DROP BY OVER 75%!

Here’s a cost comparison between the average cost to have a PV panel system installed versus a conservative projected installed cost of our new system.

For all of you extra-curious types, we also want to mention that the system will include an oil/steam separator because, as we all know, water and oil don’t mix. This technology has been around for a long time and will allow our system to run on a closed-loop, using the oil and water over and over again. That’s it. Not so outrageous after all! 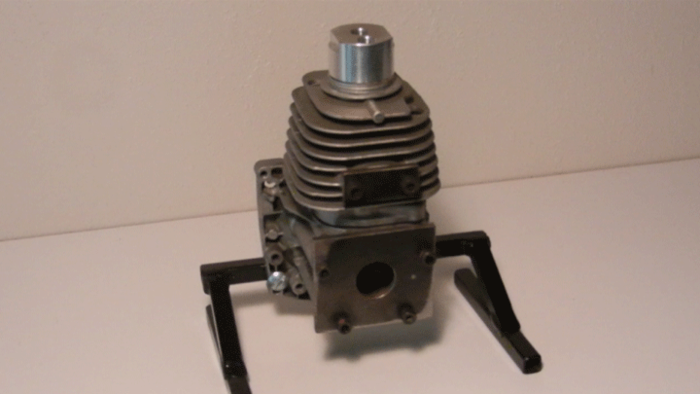 For our prototype system we engineered the conversion of a small, 31cc, 2-stroke engine that you would typically find in a weed-eater or other similar equipment.  Once we finished the design, Matt machined all of the parts necessary to make the modification.  Matt has asked that we don’t brag too much about him but he’s pretty darn good at what he does and in no time at all we had a finished prototype engine that was ready to be tested.  Below you will find a diagram from our patent on this new approach.

The next step is pretty obvious: Let’s test this thing!  We started searching for a place to conduct the tests and presented the project to Dr. Steve Watkins, professor of Electrical Engineering and associate chair of the department at Missouri University of Science and Technology. We told him the story of our research, explained the concept and design we had come up with, and let him inspect the modified engine. Needless to say, he was extremely enthusiastic about the work we had done and with his help, we presented the task of conducting these tests to a number of students for their senior design projects.  The idea is moving forward and becoming a bigger reality each day!

As it looks now, there will be 4 different senior design project teams working together to test the closed-cycle solar system.

With this level of expertise working on the project, we shall soon know how well this idea can help the world!

We’re currently in the process of trying to raise money for the testing via crowdfunding on Indiegogo.com.  Crowdfunding aims to raise a certain amount of money by receiving small donations ($1, $5, $50, whatever the contributor wishes) from as many people as possible.  Please check out our campaign page and help us reach our goal! 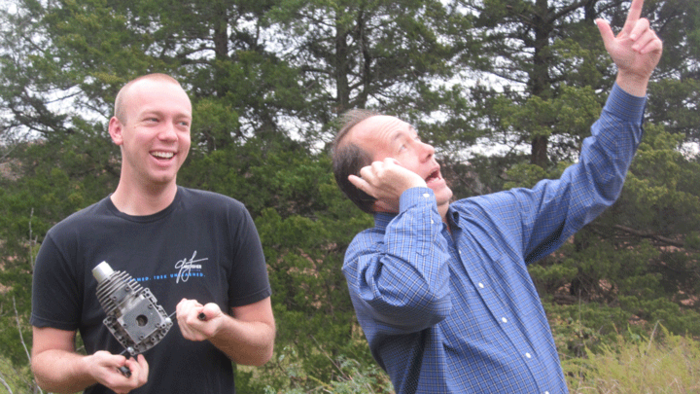 Ben trying to lasso the sun… Or something like that

The first is that we’ll need to test a number of different oils to find one that has a reasonable life expectancy as used in our system.  This should not be too difficult, but if it does turn out to be an extensive challenge we’ll be consulting with a chemist to explore our options.

The second is in regards to insulation of the engine.  It will be extremely important to make sure that as much thermal energy is contained within the engine to assure that it runs as efficiently as possible.  There are many different ways to accomplish this, we’ll just have to find out which works best!

Please be sure to see our FAQ page, we’ve posted all of the common questions people have and given the answers!

35 thoughts on “About the Project”

Like the HydroICE Solar Project? Help with the development by contributing!